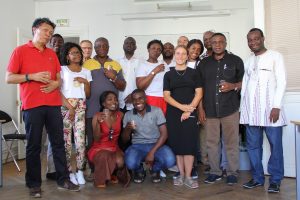 The purpose of this Workshop is to defend the idea that African situations provide insights into the electoral event around the world. Indeed, since the 1990s, the end of single-party regimes has produced a sharp increase in the number of elections on the Continent. Most of the time, these political experiences are considered by the researchers, either as elections “not like the others”, or as elections “without choice”, or even “without voters”. When they are compared to the so-called Western democratic normality, African elections are then condemned as imperfect, ranging from clumsy imitations of the Western formulas, to mere simulacra. These positions were rooted in the fact that, for a long time, the credibility of electoral analysis in Africa seemed subordinated to the possibility of applying to this region the same quantitative tools used in the West. One of the signs of the persistence of this postulate is that, until now, the electoral process is reduced to the ballot procedure, to such a point that the application of the numerical rule of the majority remains, in the eyes of the researchers, the only legitimation procedure for elected officials. Any uncertainty about the representation of the political totality is removed through the publication of the ballot results. These approaches reveal, in some respects, a major methodological bias. Indeed, African cases show that this rule is not sufficient to conclude all analysis of the electoral process. To accept the idea of its insufficiency amounts to assuming, on the one hand, that there are radically different mechanisms of legitimization and, on the other hand, that it is important to distinguish between an election and the voting procedures. The election must to be understood as the entire process through which the rulers are selected, while the ballot is merely a mechanism / tool to point them out. The “Re-examining Elections after African Experiences” Research Project follows this path. It rejects the idea of imposing a pre-constructed theoretical framework on elections, and assumes that the definition of the boundaries of the electoral process is a question open to empirical assessment, and a matter to be investigated through anthropological and sociological research. To enquire about the electoral process under these assumptions, the project relies on a tool, the EleQta IT platform, conceived to collect considerable amounts of data and allow comparative referencing and analysis. EleQta has been deployed in eleven countries so far.

This workshop is the first opportunity for all the supervisors of the local teams involved in the project to meet. To circumvent the biases introduced by the simple application to African facts of explanations that focus on the logic of the mandate and the delegation, the participants will defend the hypothesis according to which the election deserves to be described starting from the composition of the immanent forms of social authority that give the right to rule over others. Through these forms of authority, the social body self-organizes by echoing in the public sphere the influence and authority of knowledge, kinship, right of primogeniture, the sacred, intelligence, force, etc. The election manifests itself, therefore, as one of the possible experiences of social dramatization, through which one or more bearers of these immanent forms of authority convert them into political assets by seeking recognition. The different cases are explained approached in terms of historical plots, which allows the description of the singularity while showing how they shed light on other situations.
The workshop will take place over two days. It will focus on the five plots that the project has built so far: the death of the Phoenix, the Zombie President, the dynastic solution, the election in a context of monarchy and the impossible circumvention of the vote… Each speaker will present the results of the investigations conducted on one of the nine countries (Cameroon, Congo, Congo-R.-D., Gabon, Kenya, Madagascar, Swaziland, Togo, Zimbabwe). The sessions will be organized around a main plot addressed by one or two cases.

11h-12h45 – Discussion about the EleQta Platform

Christian Wali Wali (CERGEP – Omar Bongo University, Libreville), Gabon : the “Son of …” to the Test of the Legislative.

Cecilia Passanti (Paris V – CEPED – IHA CREPOS), Kenya : The reign of “son of …” to the test of electronic voting.

François Palama (Kinshasa University), DRC : Going Towards the Consolidation of the Dynastic Order.

Sylvie Ayimpam (IMAf), DRC : The Impossible Avoidance of the Vote: Going Towards the Consolidation of the Dynastic Order?